One completely random project I worked on was trying to extract DNA from silkworm for Next-Gen Sequencing. This proved to be harder than I imagined from what I hypothesize to be endogenous DNases (https://www.tandfonline.com/doi/abs/10.1080/00021369.1972.10860497 ). An agent to inactivate them, or perhaps harvesting the silkworm at the time of sacrifice would stop this from occurring (These ones were frozen in liquid nitrogen originally). In essence, this experiment was a failure!

Initially, the Silkworm was processed using the Qiagen DNA Mini Kit 51304 (Lane 1) and gave low yield and DNA that we suspected was sheared or degraded.

We then attempted to use the Qiagen DNA Mini Kit 51304 (Lanes 2 and 3), with differing homogenization strengths in order to see if that was the issue. Ultimately it gave a low yield, but showed a similar degradation pattern as before.

Suspecting it may have been an issue with the Qiagen kit and its columns, we switched to the more robust Epicenter kit MCD85201 (Lanes 4 and 5), and determined that DTT might improve the yield due to its ability to help extract DNA from the chitin so we decided to incorporate that as well. We also switched to using a mortar and pestle as a gentler method in comparison to the tissue ruptor.

Additionally, we processed 2g of the Silkworm with a mortar and pestle, suspended it in 4800uL of Lysis solution from Epicenter with 0.1M DTT and Proteinase K, and left it to lyse overnight at 55C. The following day we processed it using the Epicenter kit (MCD85201) and it had no yield whatsoever. This result is not present on the E-gel.

Due to the aforementioned result, we did some more research and discovered that silkworms have DNases that are present so that could be the primary cause of degradation and low yield. We used a custom lysis buffer that is high in salt and proteinase K in order to combat this issue. The 30mg of silkworm was processed quickly and lightly with the tissue ruptor in the lysis solution while still cold, thus hopefully preventing the activation of any DNases. Ultimately, we still saw degradation (Lane 6).

Lastly we decided to do a combination of the custom lysis buffer with the protein precipitation step from Epicenter since there was a lot of fragmented material and residue when we performed the extraction before. This did not alleviate the problem either. However, it seemed to improve the yield (Lane 7).

Conclusion: DNA degradation is occurring with the silkworm possibly as a result of endogenous DNases present in the silkworm (https://www.tandfonline.com/doi/abs/10.1080/00021369.1972.10860497 ). Perhaps extraction of gDNA from the silkworm has to occur at the moment of harvesting or shortly thereafter. 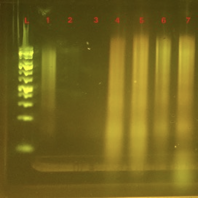 Conclusion: DNA degradation is occurring with the silkworm possibly as a result of endogenous DNases present in the silkworm (https://www.tandfonline.com/doi/abs/10.1080/00021369.1972.10860497 ). Perhaps extraction of gDNA from the silkworm has to occur at the moment of harvesting or shortly thereafter.

Find your community. Ask questions. Science is better when we troubleshoot together.